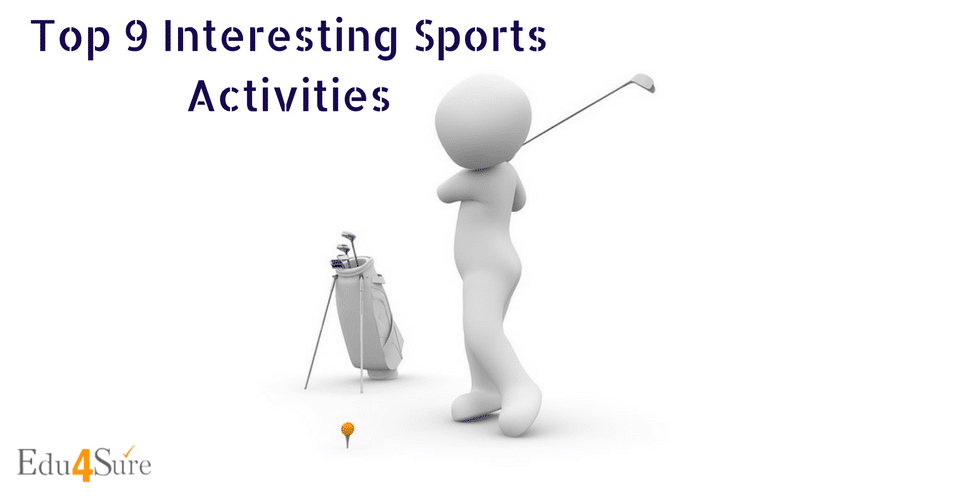 When I talk about sports activities people usually think of having two teams, fighting over to win a cup or trophy or sitting in a room dueling over a board to win. Cricket, Football, Hockey all these are the first names which occur in our mind when we think of sports.

These mainstream sports attract most of the people. However, there is a lot more to sports than just hitting or kicking a ball. There are many other interesting sports activities around in the world that you might not even hear about or see.

“The five S’s of sports training are stamina, speed, strength, skill, and spirit; but the greatest of these is the spirit.” – Ken Doherty

Living actively is the way to a healthy lifestyle most people agree to this and sports is a big answer in doing this, leaving a sedentary lifestyle behind and living actively. But there is a problem these require a lot of knowledge and skills and also these activities become monotonous and tedious.

Hence, here we are going to talk about a few unusual sports activities which not only soothe your combating spirits but also provide you with the very basic motive of the sports, well! Yeah, it’s FUN.

So, here it goes, some interesting sports activities I hope you will enjoy!!

1. Quidditch is one of the top sports activities

Well yes, you read it right, remember all those brooms swooshing here and there and Harry is trying to find the Golden Snitch. Now you can also do it.

It started as a fictional game for wizards in the world-famous book series by JK Rowling “Harry Potter”. Potterheads loved the idea of Quidditch so much that it soon became a real sport played internationally. Seven athletes make a team who must play with a broom between their legs at all times. It borrows several elements from Rugby, Dodgeball, and Tag.

People refer to the game as muggle quidditch because muggles are the people whom series characters call non-magic folks.

Rolling down the hill, it was your childhood fantasy, remember? It’s now a sport.

Zorbing is a recreation or sport in which people roll down the hill inside a transparent plastic orb.

Generally, it is performed on a gentle slope, but can also be done on a level surface; it provides more control to the rider.

It seems like an extreme sport but it depends on how you take it. There is no competition about it unless you try to compete with your friend about whether you will do it or not.

Here comes one from India it is a traditional game played in Manipur which is like football but there is a twist in it there is no ball, there is a coconut which is used as the ball.

It is quite similar to Rugby in many aspects, there are two teams in the game and they battle for an oil-soaked coconut that they need to carry through the goal line where they need to place in the box at one end of the field.

It’s not at all an easy task to catch and snatch the coconut because players rub mustard oil and water on their bodies making it more slippery and it becomes a difficult task for the opponent to get hold oh them.

So you are the tough guy, go for this one.

Love water sports? But don’t want to go for Scuba diving, don’t have a license or permit to dive or all the complicated equipment are a big no-no for you then yes you have an option here.

Snorkeling is simple and if you want to explore some underwater world at a very cheaper rate it is the thing for you.

It is amazing fun and a very relaxing way to view the colorful and fascinating world just beneath the ocean´s surface.

Although you may find it unbelievable, toe wrestling is a real sport complete with its world championship.  It is quite similar to arm wrestling in which players attempting to pin down their opponents’ toes for three seconds.

Players play with their bare feet and alternate between their left and right feet and play to the best of three rounds.

The World Toe Wrestling Championship has been ongoing since the 1970s and enjoys growing participation every year.

Take off your shoes and socks, folks – it’s the toe-wrestling time!

Just before taking off into thin air!

This one is brilliant! Humans really can never give up on the dream of flying, and Kitewing is the latest adventure that they have devised to make that happen. It is played in Finland.

It is more or less skiing plus flying. You ski with a device called Kitewing in your arms, and this device provides you with the necessary lift at high speeds to take off and fly!

When you will come back to the ground it is a question which nobody knows the answer to in this sport. It is extremely dangerous but growing in popularity. I can see why, well it is adventurous.

In 2004 developed by Filip Eyckmans in Spain Bossaball is an amazingly new and unusual sport.

It is quite similar to volleyball, but it has included several elements of football, gymnastics, and Capoeira ( A Brazilian Martial Art)

The game is played on a specially designed inflatable court with a circular trampoline on each side of a net.

It is a ball game between two teams, each consisting of 3 to 5 players. The trampolines make it possible for players to jump a dozen feet in the air, making it possible to get great hang time and to spike the ball from dizzying heights.

A spectacularly acrobatic and energetic game, baseball is a marvelous blend of sport, music and great enjoyment.

It is known as the toughest race in the world and has a series of competitions in which a person needs to be mentally and physically fit.

It is an eight miles assault race through various types of obstacles like mud, wires, fire, and water. Runners are needed to take their bodies through thick mud, under the barbed wire and huge barricades of wood, hurdling over walls of fire and diving into freezing lake.

It’s not unusual to see competitors face being burnt, scratched, bruised and even electrocuted.

It’s all about survival, it is physically challenging, mentally demanding, fear-inducing and spectacular to see.

9. Pillow Fight League is one of the most unique sports activities

Pillow fight, What? Yeah, I did it all my childhood with my siblings.

It’s not more your slumber party game now it’s a Toronto Based Sports League. It is a women’s sport and hosted in a fighting arena, it is very much like a boxing or wrestling match just with a pillow in hand to beat each other.

Girls fight with arm and knee pads and a standard size polyester pillow and a referee to control them still it gets violent sometimes. All the moves are legal as long as you have a pillow in your hand. A match ends with a three-count pin or submission.

Surely! This is just a list, create your version of these sports and beat the summer heat playing them.

Why Sports Education Is Essential?