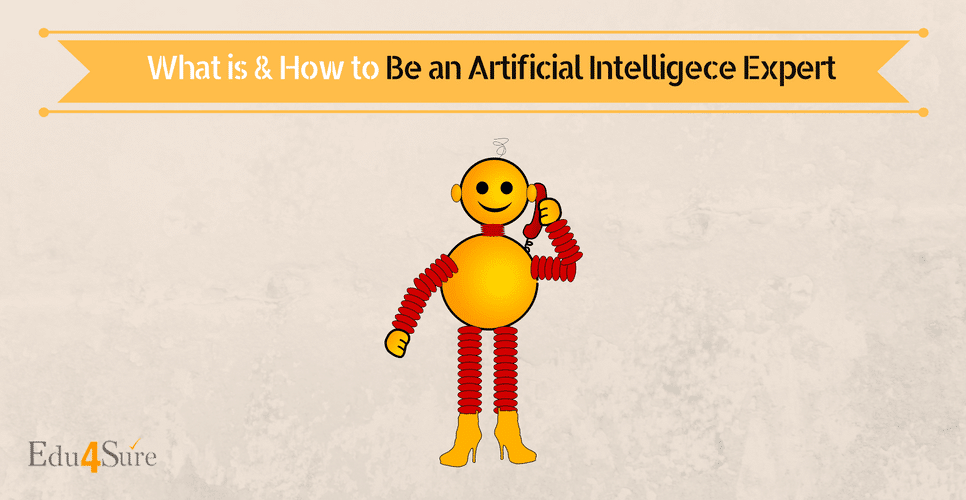 Quickly Jump Out Across Sections
What is AI?
What is intelligence and how it can be artificial?
Broad research areas in AI
1. Natural language processing
2. Neural network
3. Expert systems
4. Robotics
5. Fuzzy Logic
Goals of AI
How is AI helping us?
Risks of AI
Talent demand-supply gap
Skills and Abilities Helpful to Careers in AI
Educational Requirements to choose a career in Artificial Intelligence

You must have heard the buzz about the self-driving cars recently and have wondered what all is this about? Have you wondered how the game of chess when you play against the computer plans its moves? Or how a robot on the shop floor executes the tasks seamlessly? Or how Siri and Cortana understand what you say and give such relevant answers? This blog will help you understand how to choose a career in Artificial Intelligence?

These things, which nobody even thought about a few years ago, are a reality now. And the reason behind this shift is Artificial intelligence. It is one of the most coveted fields for technology enthusiasts today. And if you want to make a career in AI, but don’t know what it is. And from where to build up your career, you have come to the right place, my friend!

What is intelligence and how it can be artificial?

Defined intelligence as the ability to gain and apply knowledge and skills. Intelligence is intangible. It has the following major characteristics:

It is the set of processes that enables us to provide the basis for judgment, making decisions, and predicting.

It is the act of gaining knowledge or skill through studying, practicing, being taught, or experiencing something.

It is the procedure in which one perceives and tries to arrive at an expected solution from a present situation. One take a path blocked by hurdles.

It is the process of acquiring, interpreting, selecting, and organizing sensory information.

Hence Artificial intelligence is all about inducing the above characteristics into machines.

It is concerned with the interactions between computers and human (natural) languages. It is about human-computer interaction. For example, any personal assistant systems like Siri, Cortana, Google Now. Any system which does speech/voice recognition uses NLP.

The Neural network is a system of hardware and/or software patterned after the operation of neurons in the human brain. They are a variety of deep learning technologies. Commercial applications of these technologies focus on solving complex signal processing or pattern recognition problems. Examples include recognition systems such as face recognition, handwriting recognition

An expert system is a computer system that imitates the decision-making ability of a human expert. Expert systems are aimed to solve complex situations by reasoning about knowledge, represented mainly as if-then rules rather than through conventional procedural code. Examples include systems like flight tracking systems, clinical systems.

It is the branch of technology that deals with the design, construction, operation, and application of robots. Examples include Industrial robots for moving, spraying, painting, precision checking, drilling, cleaning, coating, and carving.

Fuzzy logic is a method to compute based on “degrees of truth” rather than the usual “true or false” (1 or 0) Boolean logic on which the computer is based. Examples include consumer electronics, automobiles.

The systems which exhibit intelligent behavior, learn, show, explain and advise its users.

Crafting systems that think, understand, learn, and behave like humans.

How is AI helping us?

The primary style to AI now is machine learning, in which programs are trained to pick out and respond to patterns in huge amounts of data, such as identifying a face, object, nature in a picture or choosing a winning move in the board game of chess. Numerous sorts of problems are solved using ML.

AI is the wave that will push this generation towards the next industrial revolution. Industries across the healthcare, transportation, finance, retail, IT and manufacturing sectors are witnessing its hugely positive impact.

Artificial intelligence is also being used to analyze vast amounts of molecular information looking for potential new drug candidates–a process that would take humans too long to be worth doing. And this is just the beginning of artificial intelligence. As technology advances, so will the number of innovations and applications.

There are two schools of thought related to this. Some who think there is an existential risk because AI and other experts say that there are zero risks. But, rather than worrying about a future AI takeover over humans, the real risk is that we can put too much trust in the smart machines we are building. The problem is because a system is only as good as the data it learns from.

The rapid adoption of the machine learning technology in the finance, advertising & media, and retail sectors along with the increase in the usage of natural language processing techniques are back to the progress of the artificial intelligence market. Also, artificial intelligence in a closely integrated with big data. Big data and AI have the inherent capability of changing the form and function of the industries.

Fields like analyzing bid data already incorporate AI. Big data is currently in the exploration stage, it is to see how AI will grow as a career option. Thousands of openings in artificial intelligence and machine learning posted on job boards are going unfilled. Since it is a budding field, the demand-supply gap of talent is huge. Usually, the industry experts opine that the demand-supply gap of talent is one grey area that needs to address first. The right skills and expertise are required to make a career in the field.

Skills and Abilities Helpful to Careers in AI

The most prosperous AI professionals often share common features that enable them to succeed and make their careers. To choose a career in artificial intelligence requires:

Educational Requirements to choose a career in Artificial Intelligence

Typical coursework involves a study of:

Now as you know everything about how to choose a career in Artificial Intelligence, prepare yourself and enhance your skills to bring new wonders of technology to this world.

What Is & How To Be An Engineer?

What Is & How To Be A Data Scientist?

What Is & How To Be An Ethical Hacker?