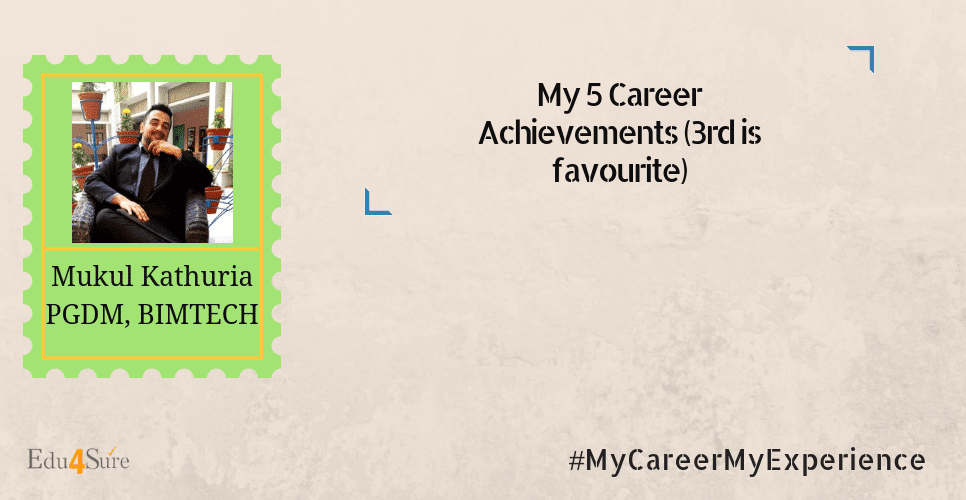 Thinking of my most prudent career achievements, I consider all those skills that have been pivotal for me to reach where I am as a professional. After all, I have harnessed all those skills with an equal influx of hard work and dedication coupled with the belief of my ménage who have always entrusted me with all my decisions throughout my life.

I am a shy person otherwise. But when I have to express myself for a cause, especially in the professional realms, I seldom hold myself back. This has been the most important factor in my ‘career achievements’, my ability to express, to make myself heard. Something that I have acquired during my school days, Springdales.

My school has played the most important part in molding me into an astute, articulate and expressive professional. I will be starting from the time when I had first entered the professional arena. I was rather naive, but I had one thing in abundance, belief.

1. My first ‘achievement’ happened during my under graduation.

I had to go for industrial training in one of the most reputed 5-star hotels in the country, Hyatt Regency. Also, undergo extensive training in all core departments of the 5-star hotel. I was pretty certain that “Food and beverage production” was the department wherein I can realize my potential. So I was extremely focused on being the chef I always believed I could.

To my surprise, I was blossoming in the “sales and marketing department”. The authority considered my ideas and I was one of the few trainees who had the opportunity of attending a board meeting. One made the key decisions about the upkeep and marketing collaterals there. It was possible because of my mind’s marketing bent.

In that board meeting, I got the opportunity to address the board members and enlist my ideas for better efficiency of the banquet department. The banquets of the hotel were always facing heavy bookings and it had led to many failed staff allocations which led to higher costs. I had devised a method to curb this, at the same time maintaining low costs and provide impeccable service. They appreciated my ideas and adhered to for a few months until they hired new staff and matters became stable.

2. My second ‘achievement’ came when I was about to finish my industrial training in Hyatt Regency.

During my brief stint in the hotel, I had learned that customers and guests are the apex body. One must always comply with the guest’s requirements. Well said but better practiced, till then I had only an idea about this elusive notion, but when I had to forego of my prized personal life to serve my duty as a hotelier.

I realized how difficult it just might be when one has to spend more than 72 hours straight at one’s workplace, sleeping, bathing, eating, you talk about it and I did it on the hotel premises. Such was the extent of Hyatt’s busy schedule. But being a trainee, I wanted to test myself. I had the option of taking my weekly off but I didn’t because my immediate boss was there.

It would have been rather cruel on my part to leave him there alone, so I stayed for 3 days at my workplace, working continuously with a few sleep breaks. They mentioned this in the appreciation certificate I received at the end of my training. A proud moment of valor and selfless duty, a memory to cherish.

3. My third career achievement came after I finished my graduation.

I got my first break in the professional world as a business executive with Bose Corp. India Pvt. Ltd. This brought me to Pune to handle 2 stores of high-end consumer audio products. But in a slow market like Pune, chances of selling such expensive audio solutions are hard to come by. It is the mettle of the marketer, that makes the difference, I realized that in no time, fortunately.

I had to be proactive and so I was. In my first month, I had made sales of more than ten lakhs for my company. This helped me to get a “WOW of the month” with Bose, a feat not many achieved. It was my sheer determination to understand the culture and people’s purchasing habits and molding my collateral accordingly.

4. My next achievement came after finishing 5 months with Bose.

I was working in a store. Her footfall was as scanty as rainfall in the Atacama Desert. My life was pretty slow with my morale on an all-time low. There were rumors that authority had taken the decision to shut down the store because the rent was bleeding the company dry. A sad moment in any organization and I took it rather personally.

I started flipping over the store’s past customers and started finding a pattern in their buying behavior. After going through their “know your customer”, I made calls to them. I realized that the purchasing intent was still there but the location played a big part in the store’s downfall. So, I started sending them emails about the exciting new products and lucrative offers that the company was giving to its loyal customers.

I started paying them visits and demonstrated the product in their houses. As a result, the sales of the store climbed up again and the rumors about the store shutting down calmed down. No special recognition was made for this but the numbers were there for all to see. In the coming few months the store touched a sales figure of 15 lakhs, something which seemed pretty distant not so long ago.

5. The last career achievement came when I was working with a firm called “Onyx” a subsidiary of Appco Group Asia. decided

I had just started working as a business associate. Although, I worked in the company only for a couple of months, what I learned over there is priceless.

I had already hit the ground as a marketer but I was working in a controlled environment. It had state of the art facilities enough to pamper me. But when I worked with Appco I realized the pains a marketer has to go through to close deals, acquire prospects, and retain customers.

I had to be on the road every day as I was working for Helpage India’s fundraising. Something which is not as glamorous as my previous job experiences, but surely the most tedious and testing. But, cometh the hour, cometh the man. I took no time and was able to raise more than 24 lakhs in liquid funds for Helpage India. All that was because of the tricks of the trade my immediate boss taught me. He used to be on the road with me giving me precious advice now and then.

I had to deal with stingy shopkeepers in a busy market street of Delhi, hopping shop to shop, hoping for someone to hear my elevator’s pitch and respond with a gleaming cheque. But hard work always pays off and it so it did back then too. After an impressive monthly collection, I was absorbed in the company. But because of my commitment to academics, I had to put a brake on it.

When someone shares the journey of his career achievements, it encourages the listeners to never stop struggling. I hope they put some inspiration in the minds of the readers. These were a few career achievements that I feel are rather extraordinary and worth sharing. decided

Do you want to share your achievements? Write to us at [email protected]

How To Stay Confident In Life And Its Benefits

What Do You Prefer – Handwriting Or Typing